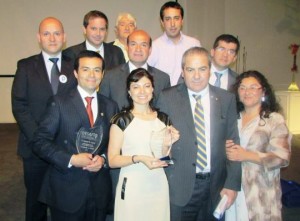 The Hospital in Lota (Chile) has been awarded by the Chilean Ministry of Health the prize «Salud Gestiona» for the initiative called «Preparation of platelet-rich plasma for patients with severe dry eye syndrome», from among 300 projects submitted. This plasma is a technique created by Vissum Corporation, which the Chilean ophthalmologist Lorena Martínez learned during her fellow training in Vissum Alicante, and later applied in her homeland.

According to the official press release «platelet-rich plasma was used as an alternative treatment for this disease, given its proven capacity for tissue regeneration in various fields of medicine. Therefore, its use has contributed to improving the quality of life of patients, and has led to an improvement of their symptomatology and the health of their ocular surface, and to a reduced risk of corneal ulcers and therefore of visual impairment.» It was also noted that «the contribution of the measure was important, because the hospital does not have this type of treatment, and the patients themselves had to bear the cost of the treatment. Therefore, in many cases cheaper, but low-quality artificial tears were used, which are not recommended in these cases given their severity. «

The Ministry of Health of Chile declares that «all patients showed a significant improvement of dry eye symptoms, which helped improve their quality of life.»