The Miguel Hernández University professor, Jorge Alió, is acclaimed one of the 100 best medical scientists in Spain 

Posted on19 May, 2022 Posted byComunicación Comments0 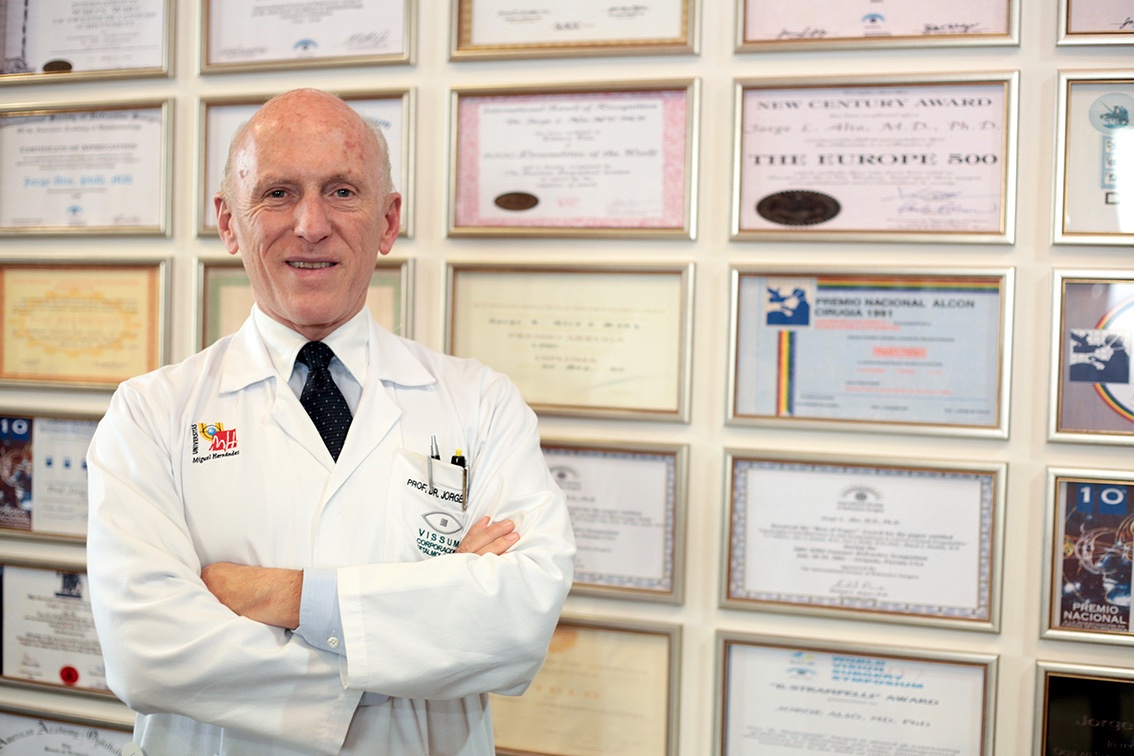 Dr. Jorge Alió, professor of Ophthalmology at the Miguel Hernández University (UMH) of Elche, has once again appeared in a ranking of the top 100 doctors. On this occasion, the expert in anterior segment has been highlighted in the first edition of the ranking of the 100 best scientists in medicine in Spain recently published by the web ‘Research.com‘. This is one of the leading platforms for research in medicine, which offers reliable data on scientific contributions since 2014. The UMH professor is here ranked 88th in Spain, and 7.071st in the world ranking.

The professor of Ophthalmology at the Miguel Hernández University in Elche, Spain, appears listed on ‘Research.com’ -one of the most prestigious scientific research websites in Spain

This new national list is within the first ranking of the 1,000 best scientists in the world in the field of medicine. For its elaboration, the academic portal for scientists uses the h-index data collected in Google Scholar and Microsoft Academic Graph, two of the most prominent bibliometric databases for the scientific community. It also takes into account the proportion of contributions made within the discipline, awards and professional achievements. Thus, the professor and doctor has been, once again, recognized for his work in the field of ophthalmology, registering an h-index of 87, 496 publications and 23.232 citations. Previously, Jorge Alió was already one of the 100 most influential ophthalmologists in the world, being the only Spanish doctor, in ‘The Power List 2022‘ of the prestigious magazine ‘The Ophthalmologist’.

‘The Ophthalmologist’ already recognized Dr. Alió as one of the 100 most influential ophthalmologists in the world in ‘The Power List 2022’

The h-index is a system for measuring the professional quality of physicists and scientists based on the number of citations that their scientific articles have received. ‘Research.com’ includes only leading scientists with an h-index of at least 70, for their ranking of published scientific articles in the field of medicine. They aim to ensure that only genuine researchers are included in this classification, by manually verifying each profile and publications across a wide range of trusted sources. In doing so, they aim to provide an opportunity for the entire scientific community to discover who are the leading researchers in the field of medicine.

Dr. Alió, who was part of the ‘Forbes’ list of the 100 best doctors in Spain, also received, on the last month of March, the recognition as one of the doctors best valued by the patients of ‘Top Doctors’ Spain, obtaining the highest score. His extensive career has led him to be the creator of the concept of ‘micro-incisional cataract surgery’ (MICS), as well as a pioneer in the area of Multifocal Intraocular Lenses (IOL) and Refractive Surgery with Excimer Laser, and phakic Multifocal Intraocular Lenses (IOL), with more than 55.000 interventions during his professional life. In addition, he is one of the leading international experts in keratoconus, presenting a novel pilot research on advanced stem cell therapy.

Currently, Dr. Alió is a member of the Board of Directors of the European Society of Cataract and Refractive Surgery (ESCRS). The web ‘Expertscape’ places him at the top of the eight ophthalmological references: refractive surgery, intraocular lens implantation, ophthalmological surgical procedures, hyperopia, intraocular lenses, multifocal intraocular lenses, laser-assisted in situ keratomileusis (LASIK) and phacoemulsification, the best surgical technique currently available for cataract surgery. He has also been distinguished with the Alberto Sols Award for the ‘Best Research Work’.

Jorge Alió has been a professor in Ophthalmology since 1987, first at the University of Alicante, and later at the Miguel Hernández University (UMH) of Elche, being responsible for the discipline of Ophthalmology in the curriculum of the Faculty of Medicine. Also, he is the director of the first online course in refractive surgery at UMH named ‘International University Specialization Course in Refractive, Cornea and Lens Surgery’. His solidarity and altruism are reflected not only in the field of medicine, but also in the Jorge Alió Foundation for the Prevention of Blindness. From here, he promotes humanitarian actions such as the ‘Nouadhibou Vision’ Project -the first ophthalmological hospital in Mauritania-; as well as cultural initiatives such as the ‘Miradas’ Painting Contest -a proposal that aims to raise awareness in society about the importance of visual health and the prevention of blindness through arts-.