At the ‘Miradas 2020’ opening ceremony, tribute was paid to the Honour Award winner José María Yturralde and for the first time in Spain the prize of the international edition was awarded to Natividad Pamies from Creville for her work ‘Te veo’ (‘I see you’)

The exhibition of the XII National and IX International Painting Competition ‘Miradas 2020‘, which was cancelled last year due to the health crisis, was inaugurated last Friday. The Jorge Alió Foundation for the Prevention of Blindness exhibition, which consists of 33 selected art works, can be visited until 9th May in the Fish Exchange Exhibition Hall in Alicante. The opening ceremony was attended by political and cultural authorities of the city, award winners, artists, members of the jury and sponsors such as Grupo Miranza and Ophtec, among others. The awards were presented to the winners of the different categories of this biennial cultural initiative, which has vision as a central theme and which is held under the slogan ‘The Art of Vision’. The event also recognised the artistic work of José María Yturralde with ‘The Best Professional and Artistic Trajectory’ Award.

It is worth mentioning that, for the first time, the award for the international edition was presented outside the American Academy of Ophthalmology (AAO), as is customary in each edition. Spain, which won in 2008 and 2012, was once again the winning country in the 2020 edition, in which 40 works from countries all over the world were presented. Thus, Natividad Pamies Diez from Crevillent, the winner of the IX International Painting Competition ‘Miradas 2020’ with her work ‘Te veo’, was able to receive her prize along with the other artists. 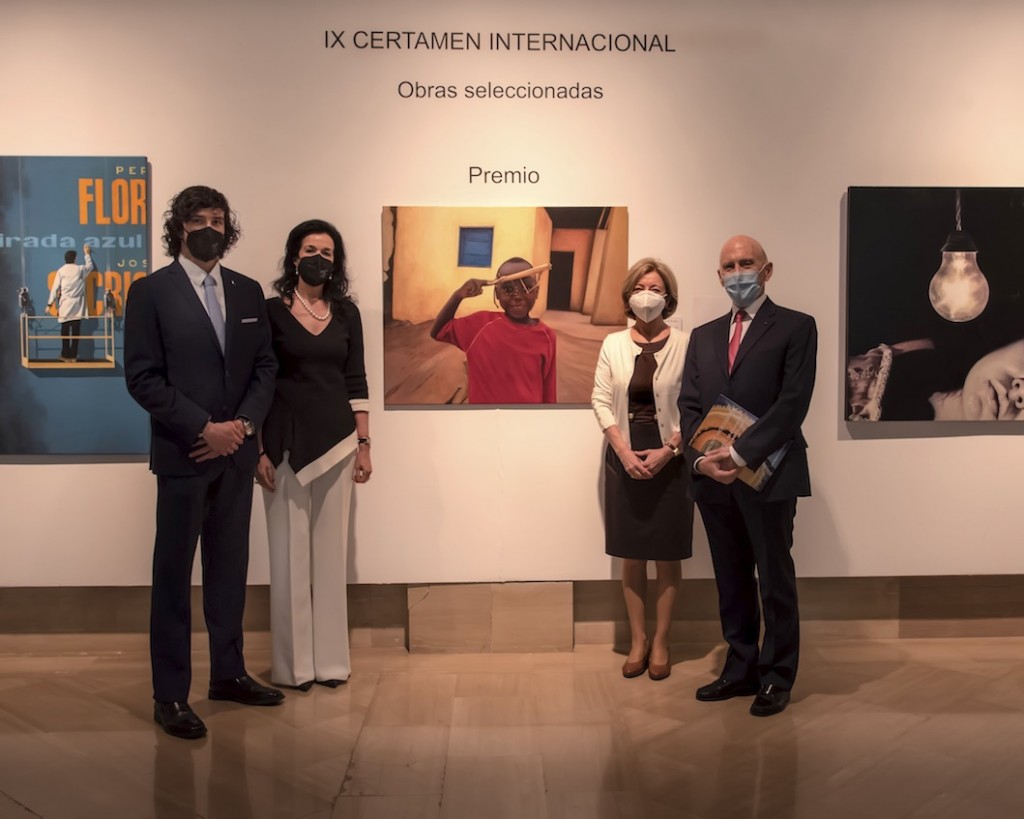 María López Iglesias, executive president of the Alió Foundation and director of the ‘Miradas’ Competition, pointed out the importance of this event “for its unique theme, vision and look. It is a competition, which is open to all artistic tendencies without any restrictions on creativity, but with educational and social purposes such as raising awareness of the importance of eye care and the prevention of blindness, through art“. She also thanked artists, sponsors and collaborators for their support in each edition of the competition, which has been celebrated for 22 years now. Since its first edition in 1998, more than 2.000 artists have taken part in it and more than 20 exhibitions have been organised, both in Spain and abroad.

At the event she was accompanied by Jorge Alió, the founder of the Alió Foundation and the competition, who highlighted the international dimension of the initiative, which aims to unite art and science: “the ‘Miradas’ International Painting Competition was born in 2005 when the American Academy of Ophthalmology (AAO) identified it as a platform for artistic creativity and professional creativity in ophthalmology”. This is reflected in the newspaper of the American Ophthalmological Society with a worldwide impact that reaches more than 25.000 ophthalmologists. “183 paintings by national and international artists have already been published on its pages, and now this winning Spanish work will also be published. Natividad Pamies’ creation perfectly reflects the values of the contest, as it shows a child who is pretending to wear glasses. And that represents the first cause of visual dissability in the world, which is refractive blindness, in other words, needing glasses and not wearing them”, Alió explained.

María José Argudo, the director of the Culture Department of the Provincial Council of Alicante, congratulated the Alió Foundation for “promoting visual artists and for looking after visual health“. For his part, the Culture Councillor of Alicante City Council, Antonio Manresa, acknowledged that this competition “is an example of sponsorship of cultural activities that give prestige to Alicante, the city that is associated with art in Spain, and to the 14 countries from which numerous creators sent works to the competition”.

The inauguration ceremony was also attended by the manager of Vissum Instituto Oftalmológico de Alicante (Miranza Group), Luis Carrasquer Burguera, as well as representatives of the University of Alicante, the Official College of Doctors of Alicante (COMA), ONCE, the Alicante Artists Association, the Family Services Foundation of the Valencian Community, Alquiba, Seur, Hotel Amérigo, Hoy es el día, Photoalicante, Información TV, Grupo Antón and TARSA, among others. 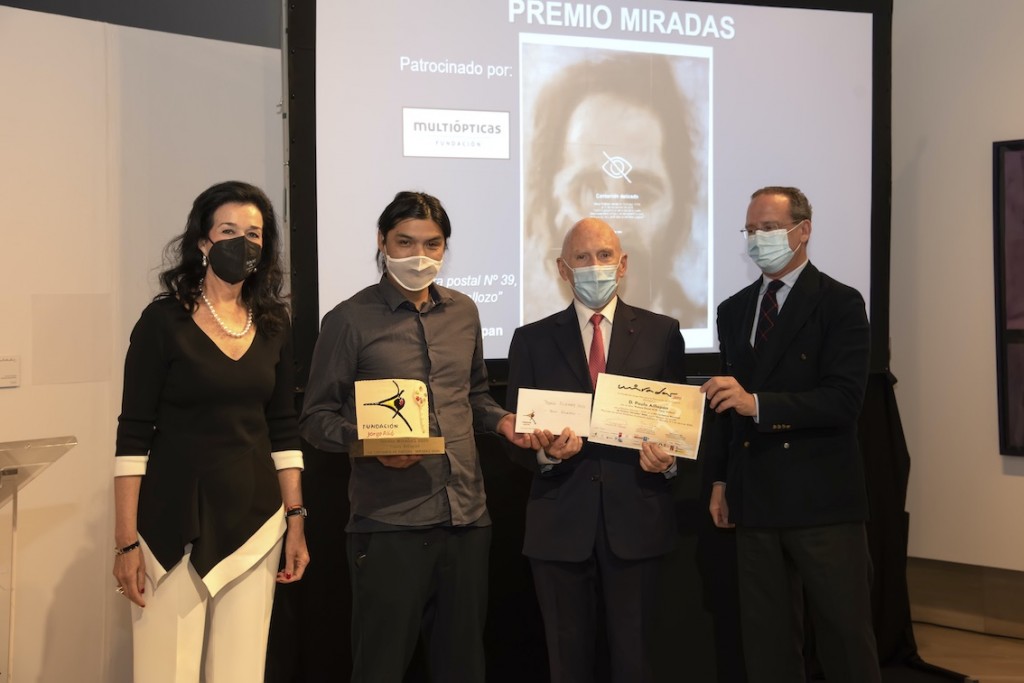 20.000 EUROS WERE DISTRIBUTED IN AWARDS IN ORDER TO RECOGNIZE THE MOST COMMITTED TO VISUAL HEALTH ART

‘The Best Professional and Artistic Trajectory’ Award of the Jorge Alió Foundation for the Prevention of Blindness, sponsored by Grupo Miranza, was given to Valencian artist José María Yturralde, for being the greatest exponent of colour. This award is a recognition of his brilliant and long artistic career both at national and international levels. It should be mentioned that he has been recently awarded the National Prize for Plastic Arts 2020. His acrylic painting on canvas entitled ‘Figura Imposible (Serie cuadrados)’ is one of the works from a series which is based on the square. It represents one of the most notable regular polygons due to its space properties and clear lines, which fill the work with a sense of organization, stability, firmness and security. Thus, this work creates poetic atmosphere, and what is more important it evokes emotion and passion, which underlie every artistic work. 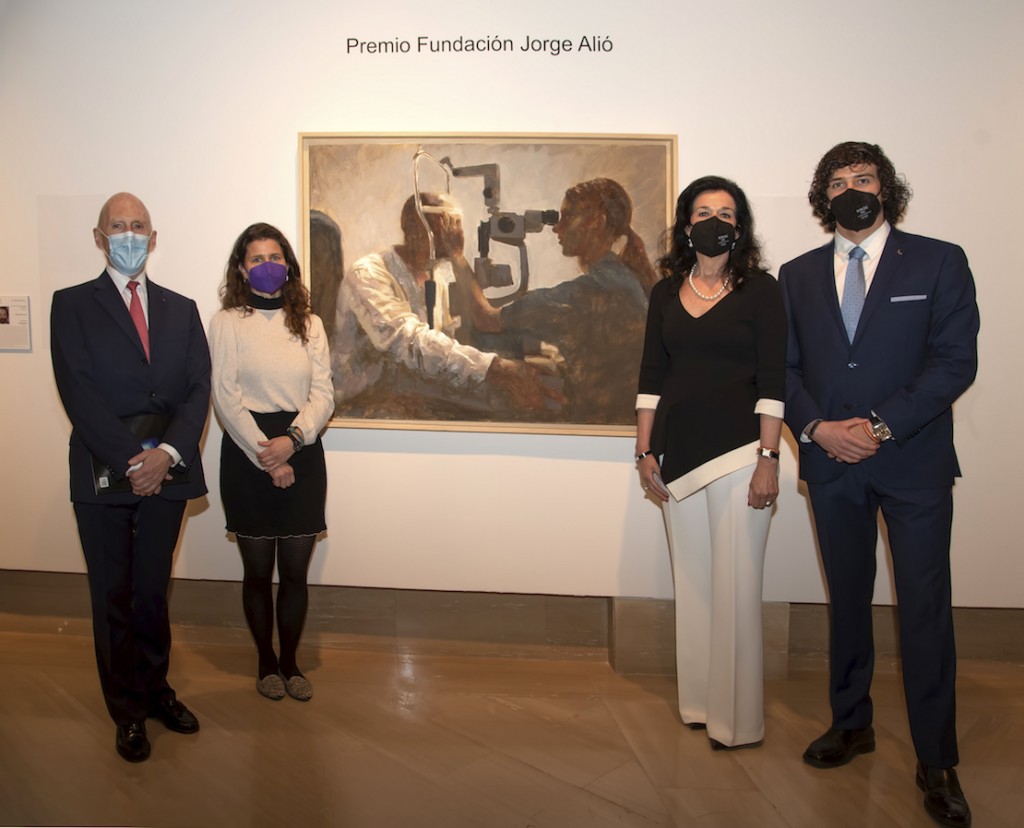 In total, more than 20.000 euros were distributed in awards. The ‘Miradas 2020’ Award, worth 4.000 euros, sponsored by Multiópticas Foundation, was given to Paulo Ayllapan  for his work ‘Pintura postal nº39, César Callozo’ (oil painting on canvas), for being the one which best evokes the importance of vision. Moreover, The Jorge Alió Foundation Award, worth 3.000 euros, was given to Ana del Valle Ojeda for ‘The Call’ (oil painting on canvas), for being the artistic work that best represents human values in the prevention of blindness and eye diseases. 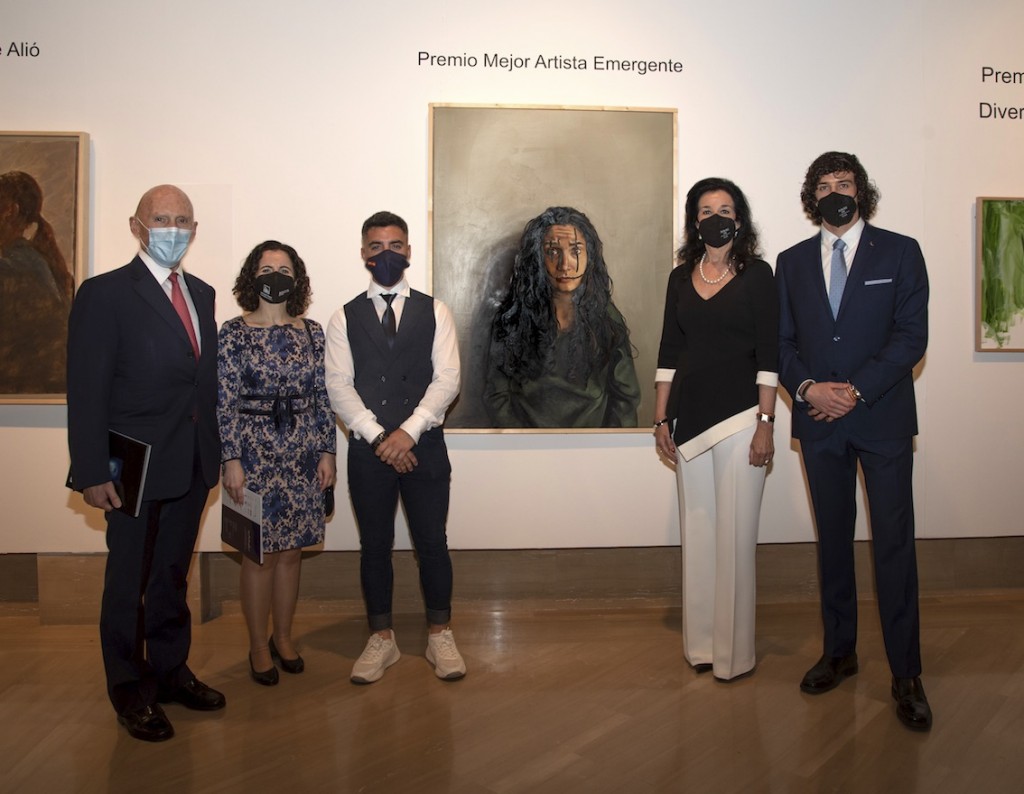 Furthermore, The Best Emerging Artist Award, worth 1.500 euros, sponsored by the University of Alicante went to Francisco Manuel Cortes Pérez for ‘Contaminación existencial’ (oil painting). The Functional Diversity Award, aimed at people with intellectual, sensory and physical disabilities, worth 1.500 euros and sponsored by International Ophthalmology Consulting, was given to Juan Luis Barud Dabrowska for ‘Ojo biónico’ (acrylic on canvas). 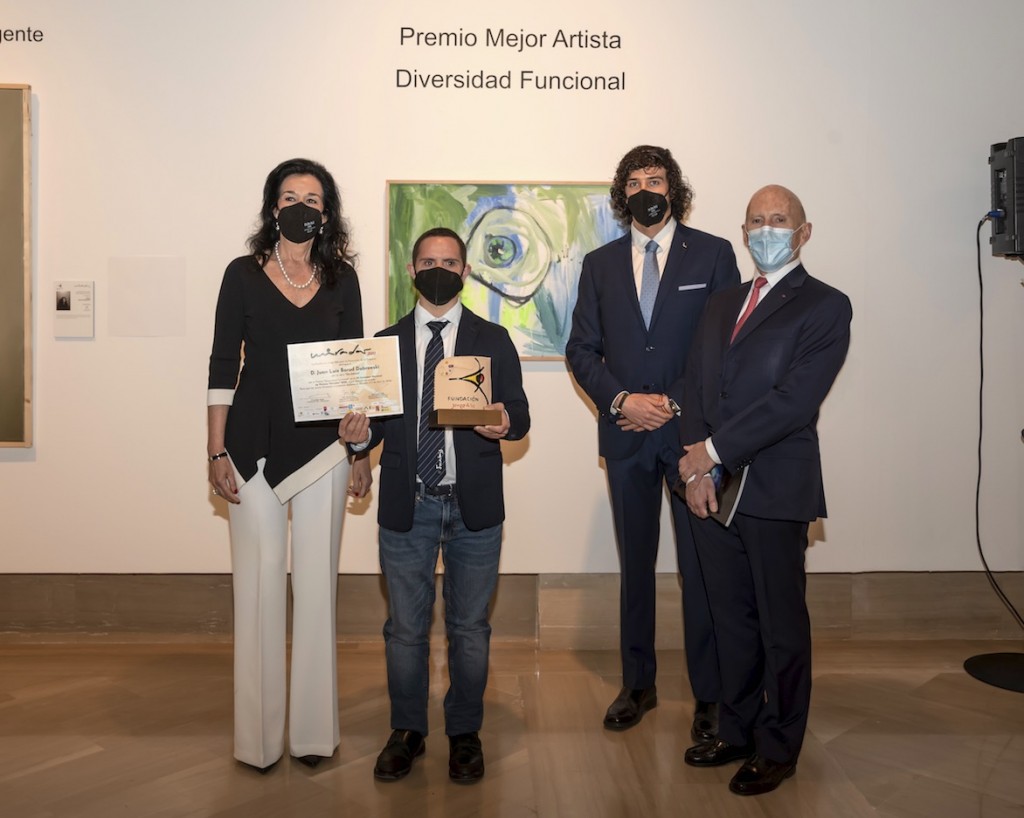 The IX International Painting Competition ‘Miradas 2020’, sponsored by OPHTEC, is presented in the exhibition. In this way visitors can admire the winning work ‘Te veo’ (oil painting on canvas) by Natividad Pamies Diez from Crevillent; as well as other finalist works: ‘Inspiración’ (oil painting and acrylic on board) by Ana María Gomáriz Martínez from Murcia, and ‘Pintando la Mirada’ (acrylic on canvas) by José Luis López Saura from Madrid.

With regard to other participants, Joaquín Santo Matas, curator of the ‘Miradas 2020’ competition and member of the Royal Academy of Valencian Culture, commented that “130 original pieces have been received from all the Autonomous Communities”. There are 37 works from Alicante, 16 from Madrid, 9 from Murcia, 9 from Valencia, 4 from Barcelona and 4 from Cadiz. The exhibition displays 33 works in total: the seven winners’ and 23 finalists’ works of the national contest, as well as the 3 works of the international contest. The works of the III Children’s Drawing Competition are also displayed in the exhibition.

The jury was chaired by the Art Director of the Juan March Foundation, Manuel Fontán, who stated that “the criteria for the selection of the winning works were based on their painterly quality and the degree of skill, reflection or inner work that can be seen, which in my opinion, was remarkable”. He also praised the work of the winning work of The Honour Award winner José María Yturralde for his career and exhibition experience. The panel of judges consisted of Juana María Balsalobre García, Ph.D. in History and expert in the museology of contemporary art; Juan García Sandoval, museologist, art critic and exhibition curator; Federico Lizón, architect, multidisciplinary artist and expert in new technologies and their application in art; Jesús Lozano Saorín, artist and ‘2014 Honorary Lifetime Achievement’ Prize winner; Begoña Martínez Deltell, gallery owner; Josep Perez i Tomas, PhD in Fine Arts and technical director of the Art Department at the University of Alicante; and Alfonso Sánchez Luna, PhD in Fine Arts and lecturer at the Miguel Hernández University. 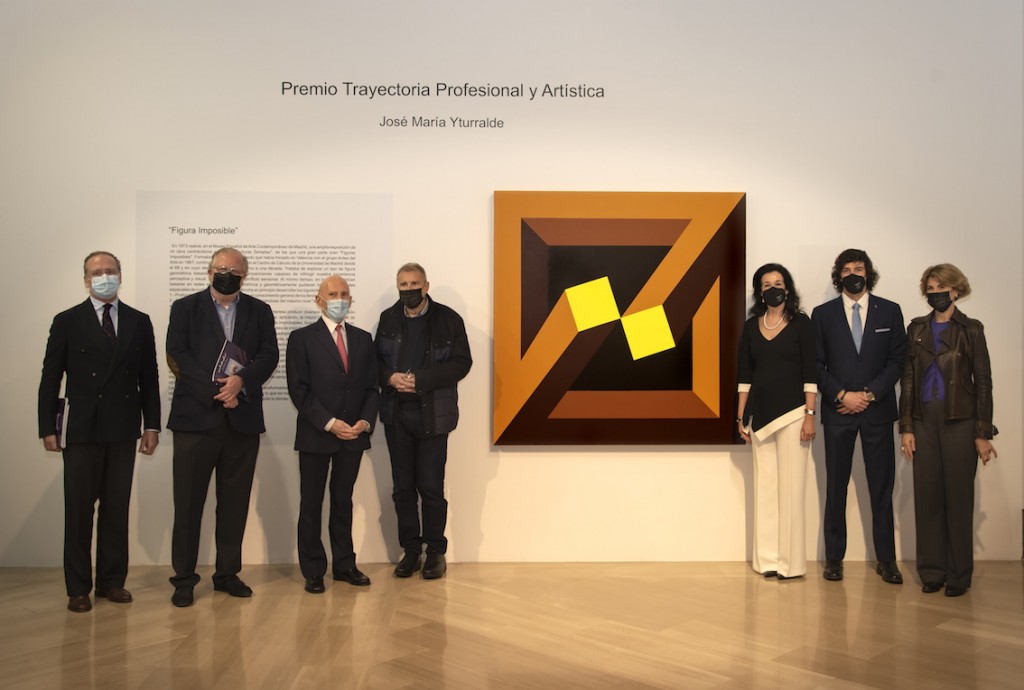