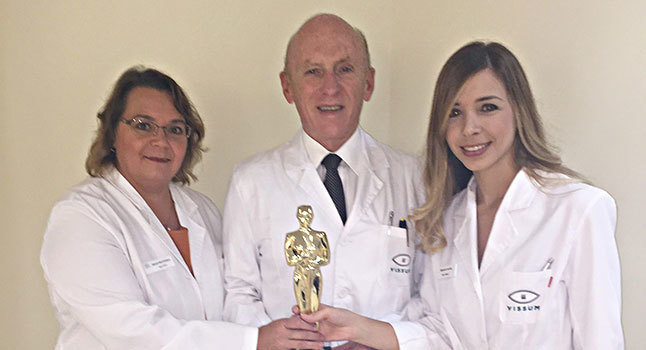 Dr. Jorge Alió received the Innovation Award José Ignacio Barraquer at the Video Cataratta Refrattiva Congress 2016, which took place on 28th and 29th October in Milan, and was led by Dr. Lucio Buratto. This award is given annually to those innovators who contribute original techniques in ophthalmological practice.

“Therapeutic keratopigmentation is currently one of the most indicated treatments in Vissum. It is appropriate for the patients who have had chronic eye diseases (such as severe trauma, corneal degenerative diseases, retinal detachments, chronic glaucoma, etc.), which cause corneal opacification, in other words, appearance of a whitish or milky area on the eye due to the chronic cicatrizing process. If such patients have no visual prognosis, they can be recommended keratopigmentation for the purpose of appearance improvement”, says Dr. Alió.

“There are other cases,” Dr. Alió adds, “in which keratopigmentation is indicated for functional reasons, in other words to improve the vision of patients who may have defects in the iris that prevent the light rays from coming to a sharp focusing point on the retina. Thanks to the corneal tattooing, the pupillary area can be better delimited and the light rays could reach the retina better, resulting in an improvement in visual acuity ».

This technique is supported by scientific research, which has been carrying out during more than ten years, and offers greater guarantees than previous techniques, which caused frequent complications. The pigments which are used in the interventions are special micro-granulated mineral pigments free of antigenic components, the result of more than a decade of research, and presented at a large number of congresses and ophthalmological conferences around the world. “It is necessary to emphasize that the corneal tattooing is not a reversible technique, and the pigment which has been once applied in the corneal stroma becomes retained there. This has been proved by many patients, which have been treated and monitored during more than 10 years.”

The research team, led by Dr. Alió, was supported by the CDTI (Center for Industrial Technological Development) and used femtosecond lasers, as well as other technologies also devised in the R & D department of Vissum. It should be mentioned that the Miguel Hernández University of Elche has also taken an important participation in the project. Vissum has been researching solutions for safe reconstructive eye treatment for the patient for more than ten years.

Printed edition of the “Information Journal“, to read it click here.