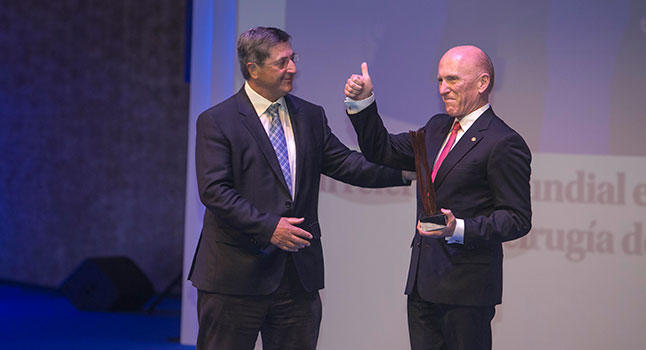 Dr. Alio received this award yesterday from Jesus Tadeo Pastor, the rector of the Miguel Hernandez University (UMH) of Elche.

Dr. Jorge Alio was distinguished with the ‘Important’ Award at the 34th edition of the gala held yesterday by the newspaper ‘Información’ with the purpose of recognizing the talent and solidarity of people and entities in the province of Alicante. Jorge Alio, the prestigious ophthalmologist and professor, was honored with this award for being “a worldwide leader in research and eye surgery”. According to the newspaper, “he is one of the most influential ophthalmologists in the world, who has been involved in academic and research activities, in combination with intense clinical and surgical practice during his professional career.” Jorge Alio received this award yesterday from Jesus Tadeo Pastor, the rector of the Miguel Hernandez University (UMH) of Elche.

Dr. Jorge Alio, an expert in diseases of the anterior segment of the eye at the international level, who has recently travelled to Iraq to treat war victims, has focused his work on the cataract, cornea and refractive surgery. It should be mentioned that he is also famous for his studies on cell therapy for treatment of keratoconus at advanced stages. Moreover, he was a pioneer in the introduction of refractive surgery in Spain, along with new techniques for corneal transplantation and an exclusive technique for eye colour changes for cosmetic or therapeutic purposes. He has recently entered the ‘Forbes’ list of the 100 best doctors in Spain, being one of the six Spanish ophthalmologists and he is also a founder of the Jorge Alio Foundation for the Prevention of Blindness, which performs humanitarian actions in Spain and abroad, especially in Mauritania.

It should be reminded, that Jorge Alio, the scientific director of ophthalmological clinic Vissum, was awarded the ‘Life Achievement Honor Award’ by the American Academy of Ophthalmology (AAO), being the first Spanish doctor to obtain it, for his brilliant career and contributions to eye surgery and the treatment of eye diseases. Moreover, Dr. Jorge Alio has been ranked twelfth among the world’s most influential ophthalmologists. The list of 100 professionals, entitled ‘The Power List 2018’, was drawn up by the British magazine ‘The Ophthalmologist’, one of the most prestigious publications in the field. He was also distinguished with the Alberto Sols Award for the ‘Best Research Work’, and he is the only doctor from Alicante among the 50 best Spanish doctors, according to the list ‘Top Doctors 2018.

Jorge Alio, the academic of the Royal Academy of Medicine of the Valencian Community (RAMCV), has been the author or co-author of over 775 scientific articles published in prestigious international journals, 360 book chapters (as editor or coeditor), and has received 103 international and national awards. Among them there is the prestigious Presidency of Honor award of Vision Spain association.