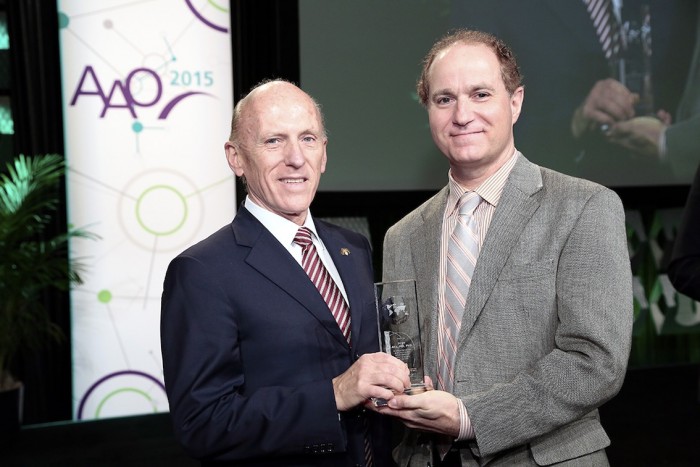 Dr. Alió’s research on Akkolens accommodative lens will be published in the prestigious journal ‘Journal of Refractive Surgery’

Dr. Jorge Alió has been awarded the “Best Paper on Refractive Surgery Award” for the best poster presentation at the annual meeting of the American Academy of Ophthalmology (AAO), which was held November 11-14 in New Orleans. It should be mentioned that in 2015 Jorge Alió, the professor of the Miguel Hernandez University of Elche (UMH), was already presented with “ISRS Presidential Award” by the American Academy of Ophthalmology (AAO) for his dedication and contribution to the field of refractive surgery and the International Society of Refractive Surgery.

Jorge Alió’s team gave an important speech on “piggy-back” lenses, which are used to solve refractive problems in cataract-operated patients and to improve the results in those who have been operated with old lenses. Moreover, the team offered a course called “Modern approaches to LASIK complications”. The course, which was created in collaboration with high-level international personalities, demonstrates a reassessment of a very low frequency of complications in this type of surgery and how they are approached from the preventive and therapeutic point of view today. Moreover, this course was used to present the second edition of Dr. Alió’s book, “Management Of Complications In Refractive Surgery”, published by the prestigious German publisher Springer.

It is also important to note another course called “Astigmatism Surgery”, which was co-directed with Dr. Dimitri Azar, eminent Chicago ophthalmologist. The course gave the most modern guidelines for the correction of astigmatism with different
technologies during cataract surgery. Furthermore, there was presented the comparison of the results between the Akkolens accommodative and normal lenses in young patients aged 30 years. It was proved that approximately two thirds of the accommodation is obtained in a young person of this age and with this lens. It is therefore a very important research, which has recently been accepted for publication in the prestigious journal “Journal of Refractive Surgery”.

It should be also mentioned that a group from the Canadian ophthalmological society attended a speech on varifocal multifocal intraocular lenses, given by Jorge Alió, who is considered an international expert of the highest level in this area. Dr. Alió, the founder of Vissum Ophthalmological Institute of Alicante, holds the largest number of scientific publications on the subject.

Finally, it should be noted that according to the Top Doctors rating, Jorge Alió has been recognized as one of the best physicians in Spain, due to his constant study and dedication. In addition, just recently Vision Spain association awarded Dr. Jorge Alió with the Presidency of Honor.