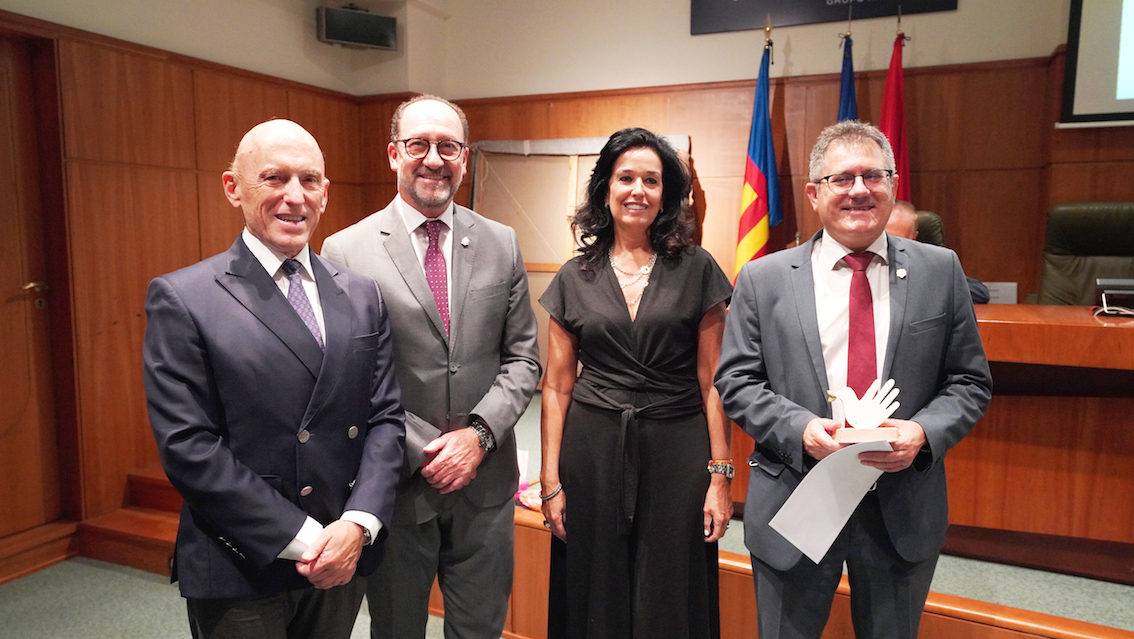 The institutions from the province of Alicante that create places of work and jobs, encourage professional insertions in the labor market, or promote innovations and investments receive their well deserved recognition

‘Peace is built with work’ is the slogan chosen by the Jorge Alió Foundation for the Prevention of Blindness to carry out a new edition of the ‘Act of Peace’, which is an event organized annually with different groups from the city of Alicante. The idea of ‘work‘ was the central theme of this ceremony, intended to recognize the effort of people and organizations that create jobs, promote investment, defend work, and train people for their access to the labor market. In this solidary initiative were also nominated the Honorary Godfather and Godmother of this 2021st year. Miguel Agulló, the president of the Agricultural Technical College for Engineers and Graduates of Alicante (COITAGRA), received the sash of Honorary Godfather from his successor – the mayor of Alicante Luis Barcala. On the other side, the deputy of Youth, Equality and Social Action – Carmen Jover, was nominated the new Godmother of Honor, and replaced the president of the Mirror Association of Alicante – Consuelo Giner.

Dr. Jorge Alió, the founder of the Alió Foundation, was in charge of welcoming the attendees of this event hosted at Vissum Miranza Ophthalmological Institute in Alicante, guests from the political, business, social, cultural and military sectors of the city. The president of the Jorge Alió Foundation, María López Iglesias, and the coordinator of the Family Services Foundation of the Valencian Community, Belén Estevan, were in charge of presenting the honorees. The self-employed sector of professionals from the Valencian Community, represented by Diego Menor, the General Secretary of the Federation of the Self-Employed from the Valencian Community, and president of the Lions Club of Alicante, received the recognition in the name of this valuable professional sector for their efforts, difficulties and achievements during this complicated year.

The COITAGRA, ASAJA organizations received their public recognition, as well. In the relation to COITAGRA, the award was collected by its former president Eladio Aniorte. And for the Agricolae Mundi and Regulatory Council of the PDO Table Grape Embolsada Vinalopó, its president José Bernabeu. Carmen Catalá, the territorial director of the Conselleria de Agricultura de Alicante, was recognized for her work at creating jobs and training, and also, for the facilitation of the access to the labor market.

The role of the local festivities was also enhanced during this ‘Act of Peace 2021‘, for their capacity of economic and touristic mobilization at the local and national level. The mayor of Agost – Juanjo Castelló, collected the award intended as tribute to the local population, and the promotion of pottery as one of the oldest and most extended local occupations. The same recognition is presented for the Alicante Bonfires – from the Central Board of Fiestas of Moors and Christians of Villena, represented by its president Francisco Rosique; and for the Association of Neighbors of Rabal de Villena, represented by its president José Cabanes, for the generation of employment in the field of crafts and services. The mayor of Orihuela Emilio Bascuñana also attended the ceremony to collect the award for the Holy Week of Orihuela.

For its part, the Family Business Association of Alicante (AEFA) – an association of more than 165 companies in the province – was recognized with another award collected by the member of the board of directors – María Jesús Arias, director of Vectalia, who was accompanied by the managing director of the association Juan José Gastón.

The authors – Luis Moreno and Andrés Pedreño (former rector of the University of Alicante) were also honored for their book ‘Europe versus the USA and China. Preventing decline in the age of Artificial Intelligence’. Likewise, the Military Emergency Unit (UME) and the Civil Guard Institution were also recognized with an award, collected by the naval commander Joaquín Vergara, who was accompanied by the sub-delegate of Defense Juan Bosco.

Organizations such as Caritas, the Red Cross, the Vicente Ferrer Foundation, Manos Unidas and the AMASVE Association also received awards for their social implications.

The ‘Act of Peace 2021’ is annually organized by the Jorge Alió Foundation and the Family Services Foundation of the Valencian Community, with the collaboration of the following entities: Alicante Costa Blanca Lions Club, Alicante Artists Association and Alicante Mirror Association.

The event was covered by the photographer Edgardo Santiago, courtesy of COITAGRA president Miguel Agulló.